The Cardigans – After All

I wrote the majority of Maybe Everything when I was heartbroken. So quite naturally, the songs featured in this writing playlist are the songs I used to listen to during the moments when I couldn’t stop thinking about my romantic interest. Even now, I still recall the evenings I spent during my commute just listening to the songs and staring out the window—wishing fervently for the pain to end.

The first track, After All, was the anthem of my heartbreak. It feels embarrassing talking about it this way, but I used to listen to this song every time it hurt so much I couldn’t do anything else but to grieve. You know, when the pain is too overwhelming you just have to take refuge—this song was my sanctuary.

During the many nights that I spent curling on my bed and crying, Lullaby of Birdland had always been the song I played last to lull me to sleep. There’s just something so comforting with the melodies and the singer’s voice that feels as though they’re saying, “Hush now. Go to sleep.”

I played Fly My Eagle during my trip to Bandung several years ago. It was the retreat I needed to organize my thoughts. And it was during this trip, with this song playing on my phone, when I finally found the courage to let go and move on from the said toxic relationship. 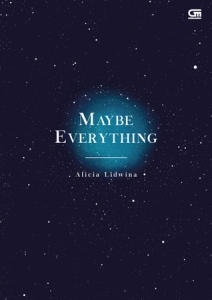 Where to find:
Goodreads | Gramedia

5 thoughts on “My Writing Playlist: Maybe Everything”

5 Facts about Polaris Musim Dingin 🌟💙🌟: . 1️⃣. It is one of the longest books I've ever penned; at around 79,000 words! 2️⃣. Yet, it took the shortest amount of time for me to write, at exactly 7 days. 3️⃣. I almost decided against publishing the book entirely. My editor, @tsaputrasakti , is one of the only persons who knows about how conflicted this book made me feel.😔 4️⃣. I had never been to Otaru--the setting for the majority of the book--at the time I was writing this novel. ☃️ 5️⃣. Actually, aside from Tokyo and Osaka, I had never been to any of the places I've written in the book. . Do you still have questions about Polaris Musim Dingin? Drop your questions in the comments section below, and I'll do my best to answer everything. 🤗 . #alicialidwina #polarismusimdingin #bukugramedia #bukugpu #bookstagramindonesia #bukubaru #novelbaru #noveljepang #bibliophile #authorsofinstagram #penulisnovel
Have you ever felt "cold" inside? Not the kind that comes naturally when the temperature drops, but the kind that haunts you whenever you feel alone and helpless--whenever you feel unwanted? . When I was writing this book, I was at the lowest point in my life. Back then, it felt like all the walls were collapsing on me, and I didn't have anyone I could share my problems with. Life, in all honesty, felt like a torture. It took my everything to stay sane--with writing being my sole solace of comfort. . So maybe that's why I managed to finish writing this book so fast; in 7 days. . Maybe that's why I was so entranced by the story I was trying to weave; because just as the characters in this book struggled and danced and thrived in my head, I secretly had hoped that I, too, would find strength within myself to do the same. . And if there is anything I'd want the readers to take from this book, it is strength. . The kind of strength that could save you. The kind of strength that brings hope; not the strength to withstand everything-- but just enough to get you through another day. . 🌟"Polaris Musim Dingin"🌟 Available in bookstores: January 14, 2020 . #alicialidwina #bukugpu #novellokal #novelbaru #bukugramedia #bukuyoungadult #yafiction #bookstagram #bookstagramindonesia #polarismusimdingin
[E S C A P E] . There's always something magical about a weekend "escape" with a friend, especially when I'm exploring things I'm passionate about; books, arts, and food. . I have to thank @sheila.valtersix for being such an amazing partner in crime today. Will definitely be visiting these awesome places again! @post_santa @transitsanta @erasmushuis_jakarta
[SUNSET] . Definitely one of my favorites. 🌅 Just between you and me, this majestic scenery gave me an idea to start on a new project 😉 . So yes, I'm currently planning for my next novel project! . So far I've come up with around 65 different scenes, and focused on 5 different characters. (In comparison, UNSPOKEN WORDS had 37 scenes during the planning phase). As the setting for my next novel is NOT in Indonesia, I'm currently swamped with research materials as well as my outline draft. . If everything works out, I'll be using the Eid holiday solely to draft this book, so wish me luck! . (65 scenes in 9 days... I should be stocking up on my vitamins....) 💊 . P.S. Untuk teman-teman yang menunaikan ibadah puasa, semangat yaa! 💪🏻💪🏻💪🏻
%d bloggers like this: