Don’t you find it funny that people drift apart for no reason?

The other day, I accidentally met one of my childhood friends in a shopping mall. The very first thought that came to my mind once our eyes met was, “Crap, now I have to make small talks.” And I don’t know if my friend realized it, but during that moment, the only thing I wanted was to escape from him, go home, and bury myself under a pillow.

Yes, I have been called an introvert a number of times, but I really doubt being an introvert would drive me so much that I couldn’t enjoy a short, innocent meetup with an old friend. Especially since nothing bad ever happened between us; it’s not like he was my ex, or he bullied me in school. If anything, our past relationship was cool.

“Hey there!” I remember he shouted from several meters away. I saw a woman of his height tailing him as he waved his right hand vigorously. I thought he wanted to give me a high five, but seeing I wasn’t interested in a high five, he opted for a firm handshake instead. “How are you doing?”

“Doing great myself! Are you alone?”

I shrugged. “Yeah, and is this your…”

He replied with “wife” the same time I said “girlfriend”, and we came to an awkward stop.

He smiled. “We should hang out sometime!”

And that’s about it. The encounter didn’t even last for a minute, and I immediately scurried away from the scene, fastening the grip on my bag, pace uncontrolled. It was only after I caught a bus home did I finally calm down, and inevitably thought of several hundred better ways to greet an old friend instead of an awkward pause.

And guess what? We never did hang out after that.

Not even a follow-up message on Whatsapp, even though we have each other’s number.

My friend, M, and I used to be inseparable. When we were kids, our parents used to change our diapers at around the same time. We attended the same school, got into the same class, and even played in the same group. The main reason for this coincidence is the fact that both our mothers are good friends with each other.

I always find it funny that your childhood friendships were most likely defined by one of these two factors:

But if I have to be completely honest about it, I didn’t mind at all.

I was never the type that befriends people easily. So a little helping hand from fate and my mother’s good relationships with people certainly helped. And the same thing used to apply for me and M. Throughout the playgroups and elementary school, M and I used to be really, really good friends.

I remember a conversation with M from the past that went somewhat like this:

“I wonder if we will still be friends in the future?” a much younger version of myself asked.

Young M laughed. “Of course we will. I mean, can you even stop being friends with someone?”

I remember laughing at his answer, agreeing that there is no way people could unfriend someone else. Little did I know that such a foreign concept in my childhood would become a spam-able feature in Facebook many years later.

We used to bicker a lot, of course, as many great friends do. But we never had a fight so big that we couldn’t mend the relationship on our own. Most of the time, he would be the one offering peace by giving me a popsicle. In an age where a chocolate-dipped popsicle could freeze my anger away, I used to think that M was a genius at making up for people.

Little did I know that he was just a natural-born master of bribery.

So when I asked myself the other day what could possibly cause us to drift apart, I spend more than a week mulling over the possible answer(s).

The thing about growing up is, we never actually realized the process until after we hit a certain point.

For me, meeting adult M in that shopping mall was one of the “points” indicating this growing-up process.

As I mentioned, we never actually had a fight so big to hurt our friendship. If I have to describe the process, it was never a specific event during our lives that drifted us apart, but the accumulation of it. It’s not “what happened”, but more of a “what has been happening”.

The process was rather simple, actually. When we entered junior high, we were put into different classes. Our parents were getting old and they didn’t hang out as often. The frequency of us meeting up in the school’s hallways was getting lower and lower. Both he and I went on and made friends with other groups.

I heard he dated several girls from our school, dyed his hair blonde, and got into trouble with the teachers. But by the time I realized how different M was to the elementary school version of him in my memories, everything was already too late. Things that we used to share each other directly had become rumors to me.

I had wondered what would happen if M and I were put into the same class in junior high. Would we still be good friends with each other? Would I be witnessing to his change with a macro lens, instead of telescoping his metamorphosis from afar? By the time we graduated high school, however, I knew it was already too late.

If life was a TV program, and if each people has their own shows, then I was already demoted from a regular to a recurring character by junior high. By the time we entered high school, I was just an extra. And by the time we entered college in different parts of the country, I was only a flashback.

I’d be lying if I said I wasn’t sad. After all, we used to know each other best. I never knew that I could still lose a friend even though we never explicitly fought with each other.

What’s unexpected, however, was just how fine I was with the change, back when I entered college. M was also just a thing from my past, and I was too busy striving for good grades, landing a decent job, and scoring myself a praiseworthy paycheck that I thought, who cares if I lose a friend or two; I can always make some more.

I wonder if M had ever thought of a similar thing.

You know, the thought process that literally says “who cares“.

Of course, the majority of my thoughts could sound exaggerated. I mean, I could always dial up M’s number and reconnect, right? I could always send him a message, and perhaps hang out with his little family over dinner at one of the shopping malls. This time, we could plan the whole encounter, and not meet each other in an unprepared state.

But there will be a lot of things missing from our friendship. I would have missed his junior high, high school, college, and several years of his career already. It would be impossible to catch every single detail that happened all these years, no matter how much he tells me about it. 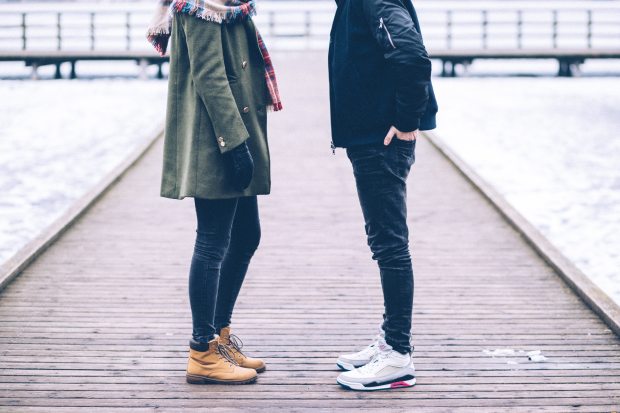 And the same thing would apply to him, too. I would already be a planet too far away from the solar system to orbit the sun. He could detect me if he tries hard enough, but it would never be the same as looking up to the night sky and spotting the moon.

Watching the knots unfurl is a hard thing to do. But in reality, I know that it would be inevitable.

I hope I get to meet M again in the future.

This time, I would be much more prepared.

Maybe I’ll even refuse his handshake and go for a high five.

On a lighter note, I’m excited to announce that my latest book, UNSPOKEN WORDS is on its’s second print right now! Woo-hoo! I never imagined that the book would be so well-received by everyone.

I’d like to thank every one of you who purchased the book. I hope you find a piece of yourself in that story, as I discovered a piece of my own while writing the manuscript. Thank you, from the bottom of my heart.

Been struggling with self acceptance as of late, and this is what came out when I forced myself to write. Anyone find this relateable?
💪💪💪
🔥
🔥🔥🔥
Loading Comments...
%d bloggers like this: