It comes without saying that I am super late into the fray. Yes; I know the game was released a couple of years ago, and I know that most people would probably have read dozens of better-written reviews on the net. But as a long-time fan of Final Fantasy, I just feel the need to write my personal take on their latest installment. 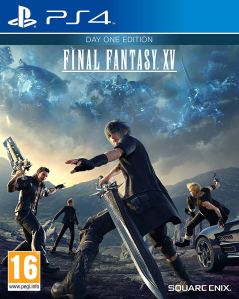 If you’ve been following me on this blog, then you would know that playing video games is one of my hobbies. I even wrote that Final Fantasy IX, with all its charms and flaws, was one of the games that changed my life. So you might be wondering, why would a devoted fan as myself be this late into playing the game?

The reason is quite simple: until recently, I had no means to play the game.

I didn’t have a Playstation 4 or XBOX One. And it goes without saying that my old PC at home could barely survive booting Windows without choking on itself and die with a repeated blue screen. It took me a very long time to save up money to buy a console, seeing that it sits somewhat low in my priority scale. But enough about that; I bought a Playstation 4 right before Eid holiday, and I devoted the days off to marathon the game.

And without further ado, here is my review.

Final Fantasy XV follows the story of young Noctis, the prince of the kingdom of Lucis. As the sole heir to a kingdom at war with its neighboring country—Niflheim, Noctis was an indispensable ambassador of peace, seeing that he’s to be betrothed to Lunafreya, the world’s oracle holding mystical powers, saying to keep the darkness at bay. 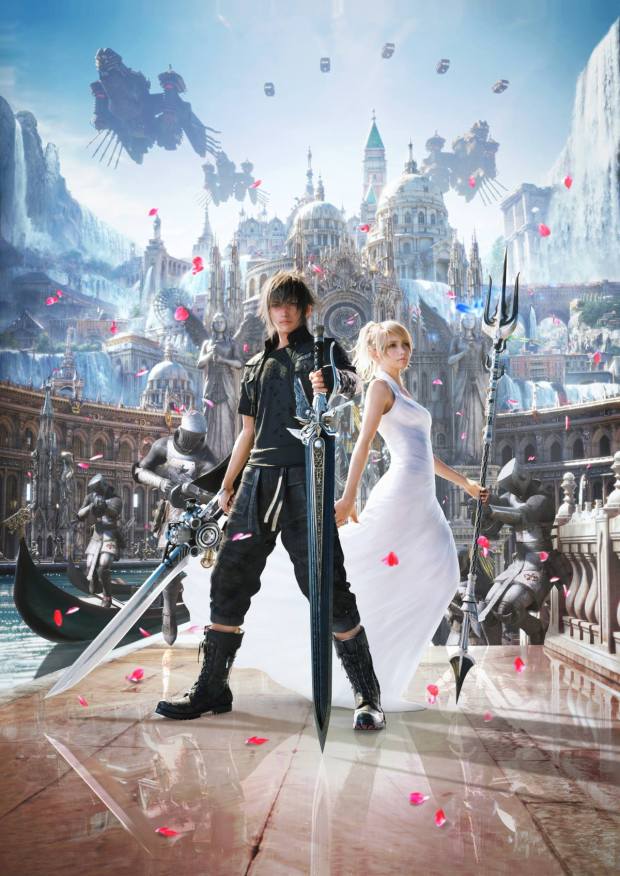 At first, nothing made sense to me. There was apparently a plague called the “Starscourge” which threatens the world by slowly taking away daylight from the sky. As if things couldn’t get any worse, this also triggers a very abominable mutation; living creatures from all over the world develop a drastic change to become Daemons; foul creatures who ravage the lands and feed on the living.

Early into the story, the Kingdom of Lucis was shown to be overtaken by the enemy. The peace treaty was called off, and the world was plunged into imminent danger of chaos and warfare. It is up to Noctis to borrow his ancestors’ powers, said to be the only cure to the darkness that plagues the world and so on… and so on… and so on….

I’m going to state this upfront: I think the story is all over the place.

With the game taking an open-world approach, plot pacing was practically non-existent, and everything in the game felt like a chore. Even the supposedly most emotional scene of the game fell flat for me. I can’t explain why, but I just can’t get attached to the storyline. I was awestruck by the world building and the lore, but the story itself left a lot to be desired. 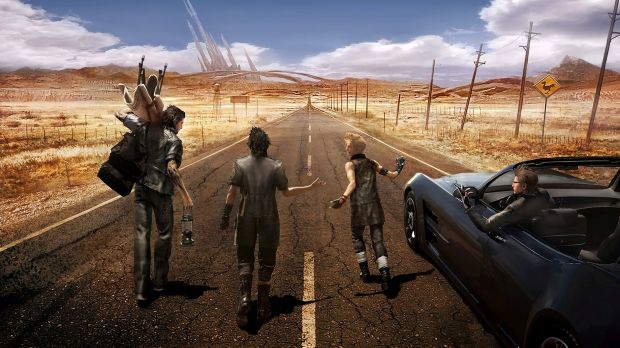 Worst part was that I didn’t find any of the characters likeable for like, 80% of the story. The childish banters among the four main characters felt somewhat flat, and for someone who is supposedly in deep love with his soon-to-be wife, Noctis sure didn’t show like he was in love.

I would rather buy the idea of Lunafreya just being loyal to her king, and not driven by romantic love.

And since the scenes with Lunafreya was supposed to be one of the climactic events in the game, failing to relate to their romantic relationship put a massive damper to the story’s impact overall.

I’m sorry, Square Enix. I am just generally not impressed with the game’s story.

It feels strange saying this after my long rant above, but I don’t hate Final Fantasy XV.

A huge factor in that is definitely the graphics. I know I complained about the story’s pacing being all over the place, but having an open world to a Final Fantasy game is very new to me. I could just literally spend hours running over the massive landscape of Lucis, admiring every single detail the world has to offer to us.

I mean, just look at these screenshots. 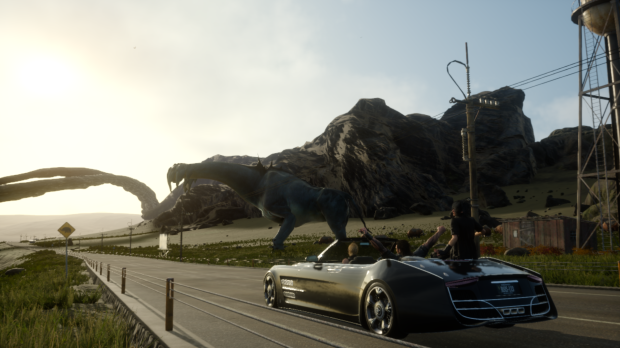 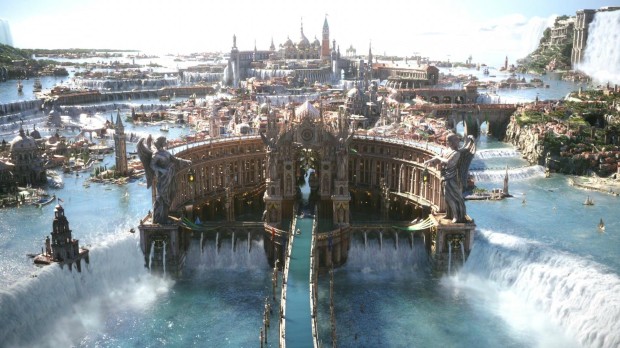 They all look amazing, and even they do not do the game graphics enough justice.

From fighting a giant turtle on the barren lands of Leide, hiding from a Behemoth in a humid rainforest of Duscae, and appreciating the bustling city of Lestallum, the graphics felt super real, especially since you can interact with most visible things in the game. Although I have to admit, that since everything looks convincing, the dungeons and undead enemies also looked ten times scarier….

Square Enix knows that they did something amazing with the graphics. That is why, I believe, they put two major features into the game: camping and taking pictures. 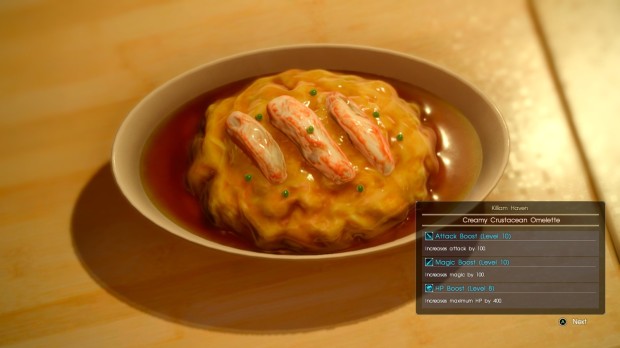 Camping is just like how it sounds. Having a massive land to conquer, what better way to savor the scenery than to spend your time out in the open with your party members? Camping felt especially fun since we could ask Ignis—one of Noctis’ aide—to cook us various food, depending on the recipes we’ve found and the materials we have on hand.  This is also where the game’s graphics shine, as almost every food in the game, looked on-point and scrumptious.

Taking pictures, however, is a feature exclusive to Prompto, another one of your party member. He will randomly (and frequently) take pictures of the surrounding scenery as you play. You can decide which pictures you get to save every time you sleep, be it in the caravan, a fancy hotel, or even during camps. 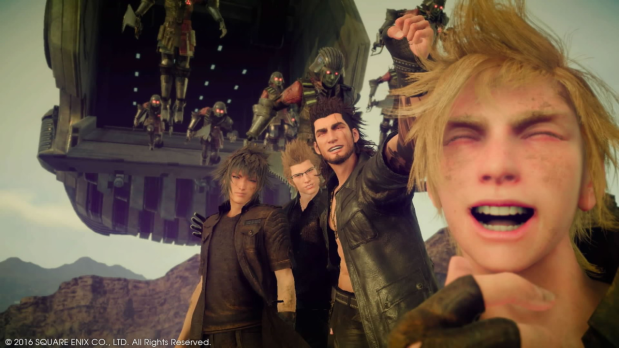 The comic relief in this is that Prompto will snap a picture at any time. This includes when you’re exploring the landscape (resulting in some of the most breathtaking pictures I’ve ever seen in a game), plowing the dungeons (and closing up on one of the undead; eew), and even during fights. This is legitimately one of the most fun features of Final Fantasy XV.

Now we can’t talk about a Final Fantasy game without talking about the music scores. The game has consistently produced some of the most iconic sounds in the gaming industry, and I was expecting at least the same level of quality from Final Fantasy XV. And you know what, the result didn’t disappoint.

I still remember the chills I got when I accidentally fell into a Bandersnatch pit near the starting area, and OMNIS LACRIMA started playing. I thought for sure, that I was gonna die the very next moment, since the music signaled a very tough boss fight, and I was only like ten minutes into the game! 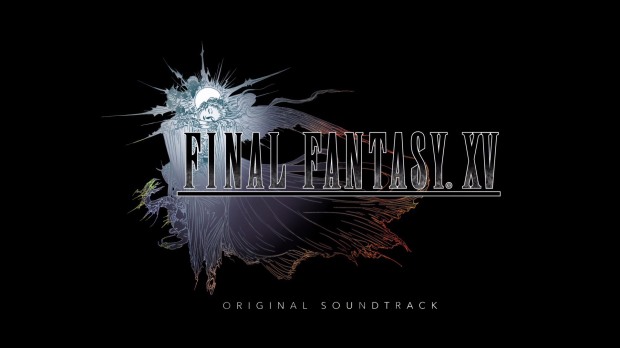 The main theme of the game, Somnus, was very heartfelt and mystical. I had thought that the tone of the song felt somewhat nostalgic, and that’s when I realized this is born from the very composer who created the scores of the Legend of Mana.

Best part of the game? Even if you don’t dig the new music, you can always play an older Final Fantasy song inside the car, provided that you have bought their “albums” from the in-game merchants. (Don’t worry, they won’t cost you a penny; only a few gils).

The music of the game, in my opinion, sets a quite high standard for other RPGs to rival.

As someone with a very bad hand-eye coordination, Final Fantasy XV doesn’t exactly provide an easy experience for me to navigate through the main story. I found the combat to be excessively full of button mashing, and the so-called “strategy” is nothing more than equipping the right accessories and mashing the right buttons.

This is actually one of the parts where I wished the game’s graphics weren’t as good as they actually are. Since everything was so realistic, more often than not, the clumsy camera settings make me dizzy. I could argue that it might just be due to my equally clumsy handling in setting the camera straight, but I digress. 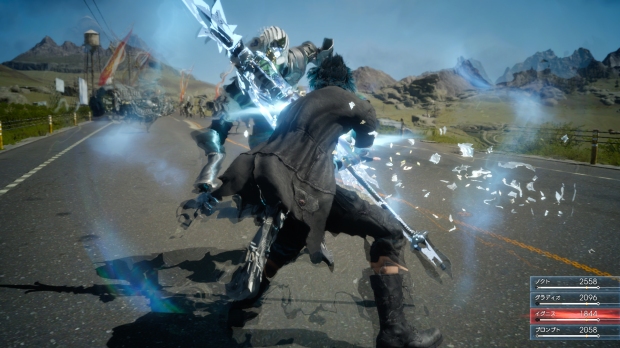 Unfortunately, the combat is not the only part where the gameplay struggles. I find that during the car drives, which is a prominent part of the game, it feels too laborious to drive manually, yet too boring when I switch to auto drive. I get that the game wants us to look at the beautiful scenery from the car, but I don’t want to spend hours of gameplay just looking at the horizons, just saying.

The fast travel option, which is unlocked by default, could be a lifesaver, but without witnessing the landscape, you could get lost when the game serves you a side-quest that forces you to roam the deepest nooks of the continent. No matter how I look at it, this is a flaw that is not easily compensated. But as a casual gamer, I feel like the times they force us to marvel at the graphics are simply excessive. 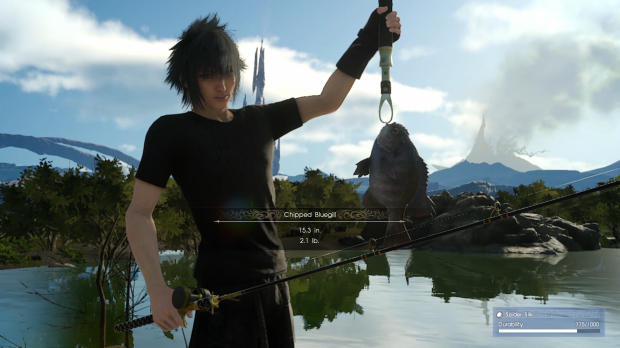 Oh, and I hate the fishing minigame.

Final Fantasy XV is not a perfect game.

I’d even argue that this is one of Square Enix’s weakest release to ever grace the market in terms of storyline. It has its own share of problems, yet it also shines in several aspects where I thought I would be disappointed. All in all, it stays somewhat true to a Final Fantasy franchise, from the ambitious dualism showcased in the plot, downright to the very distasteful minigame I found in fishing.

It’s a must play game for any Final Fantasy fan, but I wouldn’t consider it a great game.

Well, unless you’ve always wanted to explore the wild lands without leaving your room. Final Fantasy XV provides plenty of that. You know—a lot of panoramic orgasms and just staring into the distance in hopes that you’ll forget about all the plot holes. 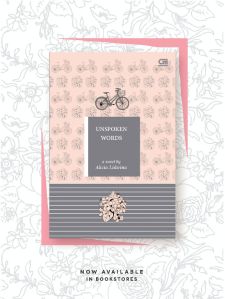 3 thoughts on “[REVIEW] FINAL FANTASY XV: So Much Potential….” 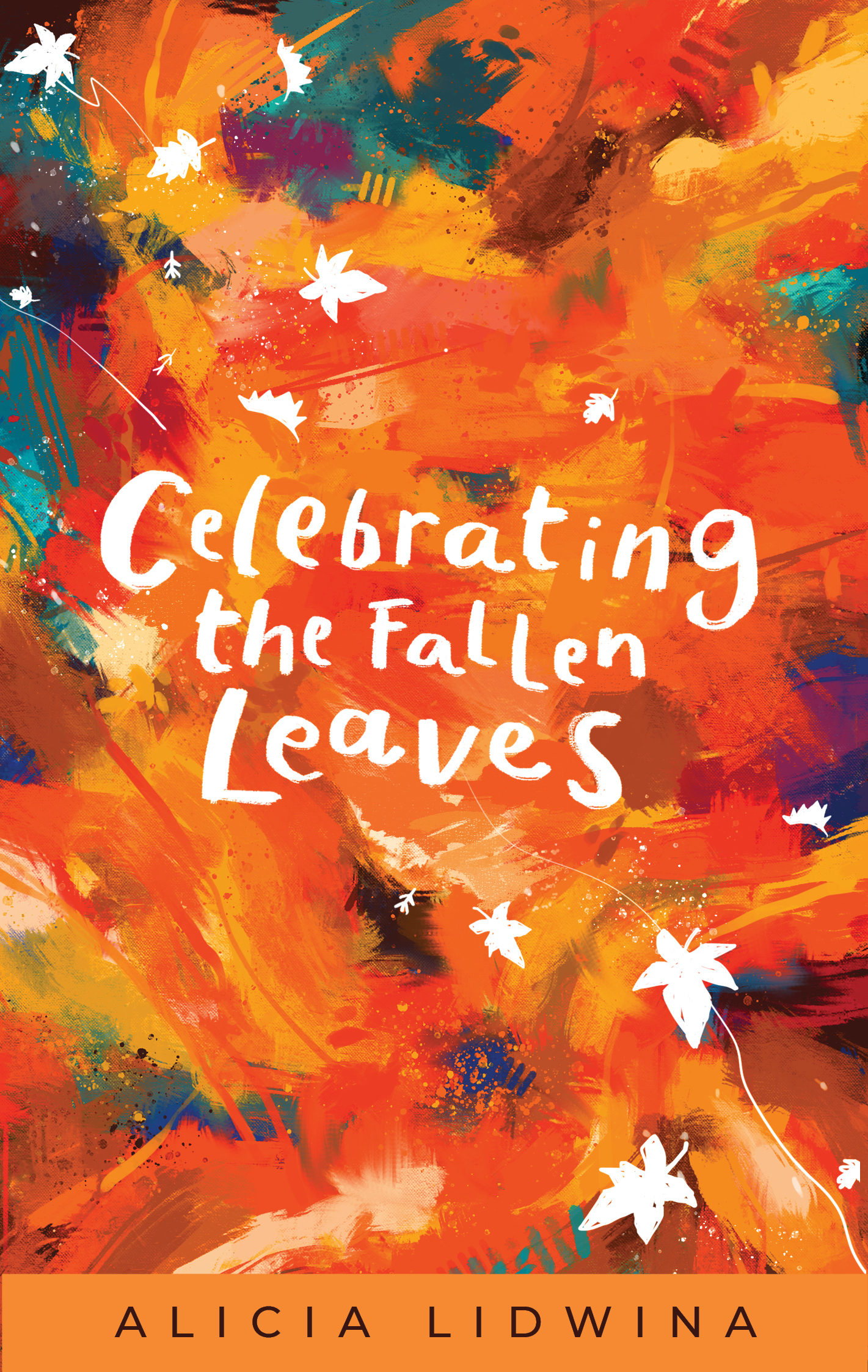